James Corbett and Fanny Green were two of my great great grandparents. James and Fanny married on 9th November 1869 at Westhide in Herefordshire - the parish they were both born in. James Corbett was a blacksmith, living in Wales at the time of the marriage and presumably for a while after, as their first daughter Elizabeth was born in Tredegar. By 1871 the family had moved back to Westhide and were living with Fanny's father Thomas Green. My great grandmother Harriet Corbett was born in 1872 at Veldo in nearby Withington. They seemed to have moved about a bit, from Westhide to Withington, to Marden in 1881, before settling finally in Withington again. James Corbett was recorded as a blacksmith in all the censuses, so maybe they moved where the work took him. The photo below was very kindly given to me by one of James's great grand-daughters Michele and shows James Corbett shoeing a horse at his smithy in Withington with the help of his son Joseph and with his wife Fanny supervising! 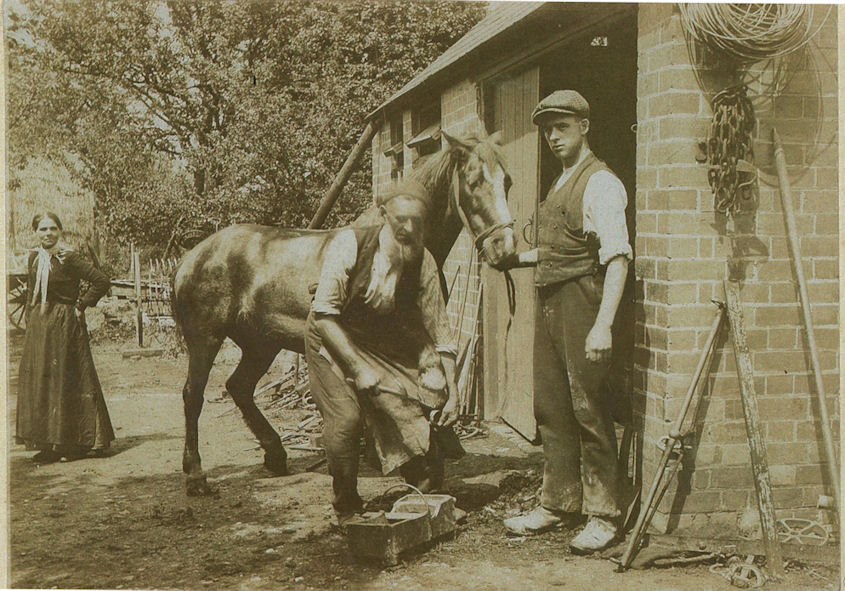 In 1891 Harriet Corbett was still living at home in Withington with her parents, and working as a dressmaker. At that point the family were living in Croft Cottage, Withington, which on the census returns at least, was recorded as being next to Stallenge which was later to become the family home. For a map of Withington, click here. The table below gives a transcription of the 1891 census entry for the family (RG12/2059 folio 140 page 9 schedule 52).

By 1901 the family were living in an area Stallenge (or Stalling) in Withington, although by now Harriet was married and living away. James & Fanny Corbett were still living at Stallenge when their son William was killed in the First World War in 1918. In fact they remained at the cottage until their deaths in 1924. The cottage they lived in still exists in Withington. The photo below shows the cottage at Stallenge with James & Fanny Corbett standing. The young lad sitting on the right is probably their youngest son William Corbett. The young man sitting on the left, I think is Arthur James Brookes, no relation but the son of one of their neighbours. In the original photograph you can see that his cap has HMS Gladiator written on it. Arthur Brookes served on HMS Gladiator between 1900 and 1901, so the photograph was presumably taken around that time. 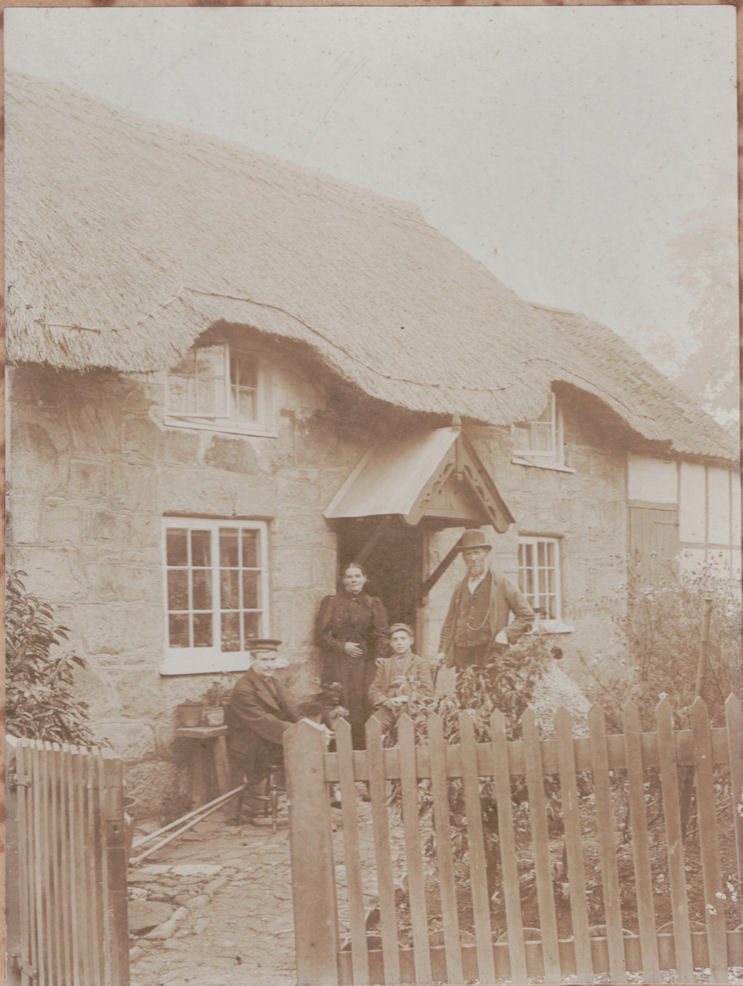 It was presumably in Withington that Harriet Corbett met her future husband James Brookes, who was working there as a gardener. Harriet had a long and interesting life, with many children and grandchildren. She ran the White Lion Hotel in Maylord Street, Hereford for 30 years after the death of James Brookes. She died in 1951 in Hereford, aged 79. For more information on the Brookes family, please click :

Below are a couple of the handful of photographs I have of William Corbett, showing him in fancy dress, with his sister Harriet Brookes (Corbett) and niece Lil Brookes and an unknown girl (dressed as a gypsy). I've had these photos for a long time, but had never known when they were taken or what the occasion was. I'd always wanted to know as these may well have been the last photos taken of William before he signed up to fight in WW1 (a fight which of course he didn't survive) Now, thanks to the brilliant Herefordshire History website I have the answer. Having done a search of the Hereford Journal I came across the article shown below the photos describing a masked dance in Hereford in February 1914. Turns out the dance was organised by William's sister (Mrs E Cole) and William was the MC for the evening. His niece Lil Brookes even won first prize for her costume as Woodbine Cigarettes! Amazingly the article lists all the costumes, including not only Lil's, but William as Black & White Whisky and his sister Harriet Brookes (my great grandmother) as Sutton Seeds; several other members of the family are listed too. So most of the mystery solved thanks to the newspapers. All I need to do now is work out who the mystery "gipsy girl" in the second photograph is - unfortunately there are 5 gipsy girls listed in the article! It would be great to hear from anyone out there who recognises our gipsy girl, or indeed from anyone else with photos from this great fancy dress party. 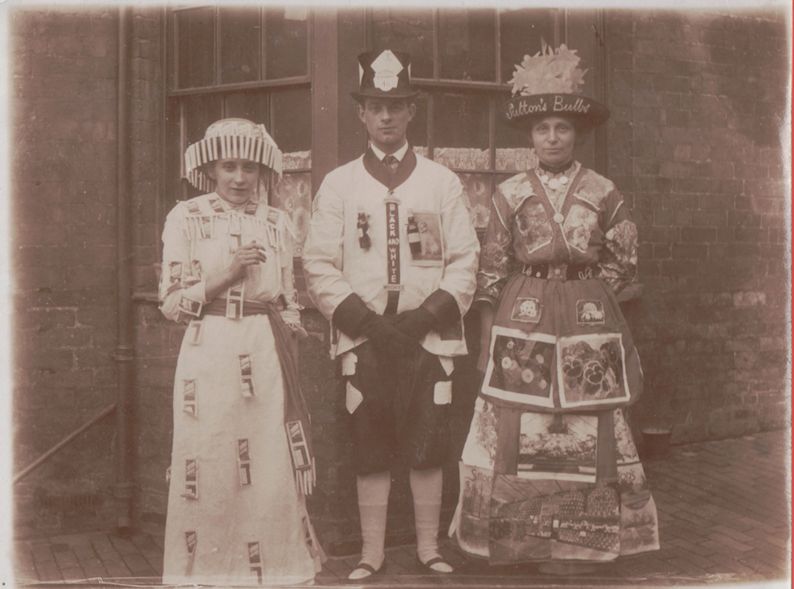 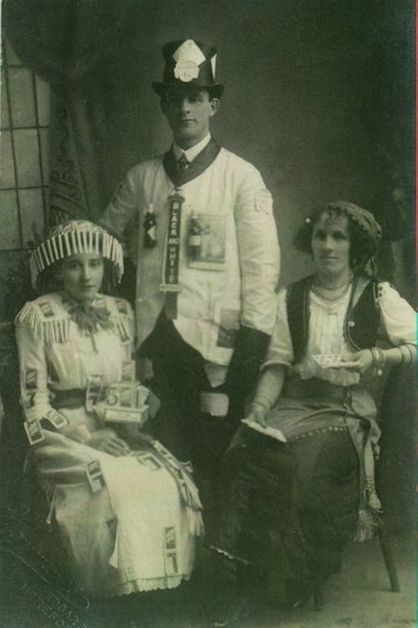 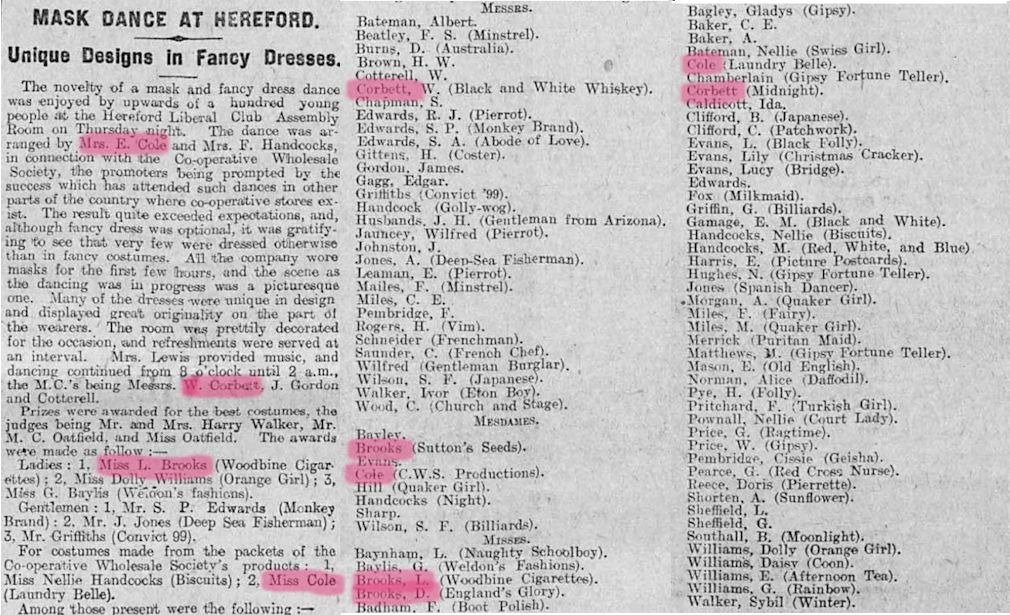 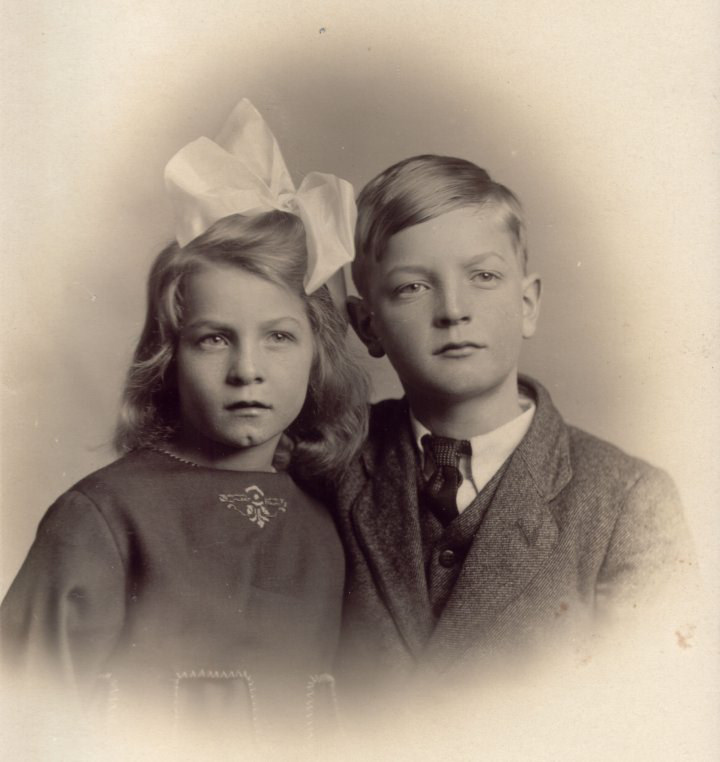 Harriet Corbett's father James was born in Westhide, Herefordshire in 1846. He was the second son of Joseph Corbett and Emma Birt. For more information on the earlier generations of the Corbett family, please click on the following link:

As far as I can tell, James spent all his early years in Westhide, he was certainly recorded there in the 1851, 1861 and 1871 censuses. James's wife to be, Fanny Green, was also born and raised in Westhide, so they probably grew up together. By 1861, James was already working as a blacksmith, assisting his father Joseph. By 1871, Joseph was dead and James was probably the main village blacksmith. James & Fanny had 9 children together, all but three of whom survived to adulthood. Although the rest did survive past childhood, sadly 2 more were to die before James & Fanny; William killed in the first world war and Anne Corbett in 1910 only 2 months after giving birth to her second child. The table below shows James & Fanny and family in the 1911 census:

James and Fanny both died in the winter of 1924 - within 3 days of each other. Their deaths were reported in the Hereford Times in January 1924 under the headline "In Death Undivided. Septuagenarian Withington Couple". The paper ran a very nice write up summarising their life in Withington and giving details of their surviving children. By the time of his death James had acquired some property and his will lists several cottages in Withington, including the one at Stallenge where they had lived.

The family tree below summarises what I know about the above generations of the Corbett family. It is hopefully reasonably accurate, but if you spot any errors, or any relatives, please feel free to E-mail me