Joseph Corbett was one of my 3xgreat grandfathers. He was born in 1808 in Stretton Grandison, Herefordshire, the second son of James Corbett & Eleanor Abel. I don't know much about his early years, after his baptism, the next reference I have to him is in the 1841 census for Westhide where he is living with his sister Eliza Corbett. The following year though he married Emma Birt at Westhide church and they went on to have several children. For more information on Emma Birt's family, please click on the following link:

In 1841 Joseph Corbett was a Blacksmith, but by 1851 he was not only a blacksmith, but the subpostmaster too, and as such was probably quite an important figure in Westhide. His eldest son, also Joseph, was already employed aged only 7, carrying letters. My 2x great grandfather James Corbett was also recorded in 1851, aged 4 living with the family at the Post Office. For more information on my 2xgreat grandfather James Corbett and his descendants, please click the following link:

The photograph below shows Westhide Post Office at some later date. Whether this is the same premises that Joseph Corbett lived in, I may never know, but it is of typical Herefordshire style and so is possibly similar at least. 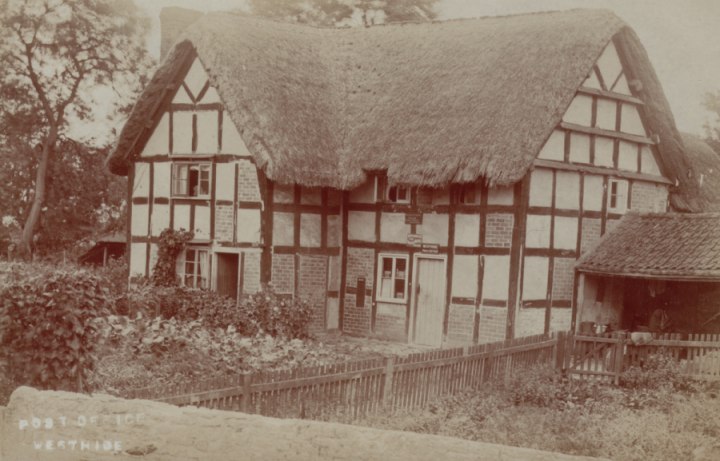 The photograph below shows Westhide church and was taken in May 2005. I haven't managed to find any Corbett gravestones there, although I'm sure some of them at least must have been buried in Westhide. 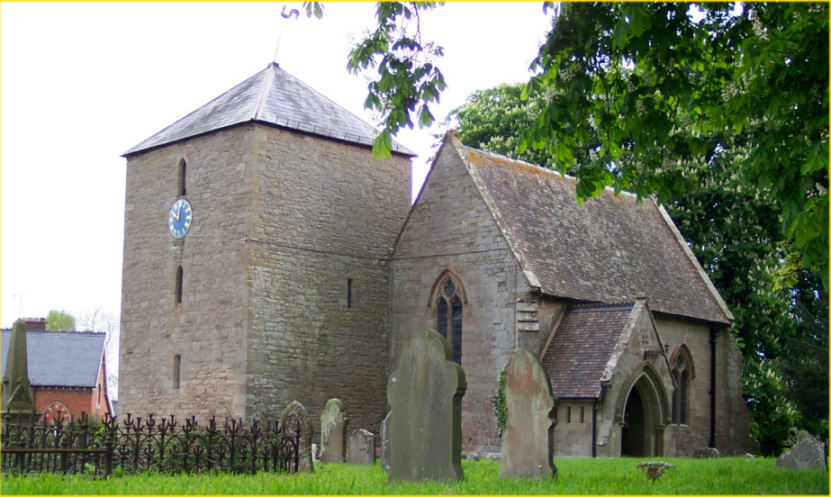 By 1861 Joseph Corbett seems to have had his own premises on the Parish Road, Westhide. James Corbett was by now old enough to assist his father in the smithy, so this was how he learnt his trade. The table below shows a transcription of the 1861 census (RG9/1817 Folio 140 Page 3 schedule 17)

By now, Joseph Corbett senior must have been a man of some standing in the village, not only was he the blacksmith and postmaster, he was also nominated in the Church Council Minutes as Parish Constable in at least 1844 to 1846. He is mentioned in the Church Accounts many times, being paid for his work on the upkeep of things such as the stove, the bell clapper and the clock. The final mention is on 17th March 1865, but this time the payment is to "Mrs Corbett for stove piping & repairing stays - 4.0". Joseph died later in the year on 13th October and perhaps this had something to do with why it was his wife who collected the final payment.

In 1871, with Joseph was dead, Emma Corbett was still in Westhide, a widow, living with her eldest son Joseph, who was by now a blacksmith too. The two of them continued to live together at least until 1891 and possibly until Joseph married in 1898. The table below gives the details from the 1891 census (RG12/2059 Page 2 schedule 13).

Emma died in 1899 in Withington and her death was registered by her son-in-law George Rock, so perhaps she was living with her daughter Harriet in her last years.

Joseph Corbett senior was born in 1808 in Stretton Grandison. His parents were James Corbett and Eleanor Abel. James Corbett was described as both a butcher and a farmer, maybe he sold his own meat from the farm. They lived in Egleton (or Eagleton), Stretton Grandison from at least 1797 until 1823, baptising all their children there. Their first children were twins, but no other sets of twins have been found yet in the Corbetts. They must have moved to Yarkhill at some time after 1823, as their youngest daughter was described as from Grover, Yarkhill when she was buried in 1834.

I don't have absolute definite deaths for either James or Eleanor corbett, but neither of them seem to have survived to the 1841 census. There is though a strong candidate for Eleanor Corbett's death in 1837. An Eleanor Corbett was buried in Weston Beggard in March 1837 said to be aged 62. The burial register says her place of abode was Shucknell Hill and that she was found dead in Westhide woods. A sad way for her to meet her end. So far I've found 2 possible deaths for James Corbett - one died in 1838 in Ledbury Union workhouse aged 72 and one in 1837 in Much Marcle aged 75. Both are close enough to possibly be my James.

I'm still trying to find out what happened to all of James & Eleanor's children. Some (both Eleanors and Anne) definitely died young as I have found their burials in the registers. There is a plausible death for the eldest daughter Elizabeth in 1845, so it looks as if she never married. The youngest son Thomas Corbett married Caroline Davies in 1848 in Worcester St Helen's and they settled in Bosbury. Although they married in 1848 the first child I can find for them is James born in Bosbury in 1860. This seem odd that they would have no children for the first 12 years of their marriage, so perhaps they had children elsewhere in those years. Sadly both Thomas and Caroline died in the mid 1860s leaving 2 small children orphaned. Fortunately Thomas's sister Eliza, by now married to John Cross, took the two children in and they are living with her in the 1871 census. I know nothing about what happened to James & Eleanor's other 3 children - James, Jane and Sarah; so if anyone can fill in those gaps, I would love to hear from them.

I am not 100% sure about James Corbett's parentage. For further discussion on the likely earlier generations of the Corbett family, please click on the following link:

The family tree below summarises what I know about the above generations of the Corbett family. It is hopefully reasonably accurate, but if you spot any errors, or any relatives, please feel free to E-mail me