The Proberts, Walls and Morgans

Jane Probert was one of my great, great grandmothers. She was born on 10th April 1843 in Weobley, Herefordshire. On 27th February 1865 she became the second wife of James Rowberry, when they married at Hereford Register Office. Although James signed the marriage certificate with only a cross, Jane seems to have signed her name properly, suggesting that she had at least enough elementary education to write her name! Jane & James had 7 children in fairly quick succession, before sadly Jane died in 1874 aged only 31. She was buried on 2nd October 1874 at Hereford All Saints.

Jane's parents were James Probert and Mary Wall. James was a mason at the time of Jane's birth and by 1851 he had risen to Master Mason, employing 1 man. James & Mary had one other child, John (who died aged 1), but then Mary died prematurely in 1845, aged only 25. James & Mary had married only three years earlier in 1842 in Weobley. James then married Ann Walker in 1846 only a year after the death of Mary - possibly because he had a small daughter in need of a mother?

By 1851 James seemed to be doing reasonably well for himself and his small family, as he was a master mason employing one man. They were living at Lidgmoor Common, in Kings Pyon, with his daughter Jane and Ann's brother John Walker, who was also a mason, possibly the man James was described as employing. The table below gives a transcription of the 1851 census (HO107/1979 ED7 Folio 349 Page 17)

By 1861, Jane had moved out and was working as a house-servant in Dilwyn for the family who ran the post office. James & Ann were still living in Kings Pyon and James was still working as a mason. By 1871 James & Ann had moved to nearby Holmer and he was described as a bricklayer - which sounds a bit of a come-down from the Master Mason he was in 1851. I haven't been able to find either James or Ann in the 1881 census, although James at least must have still been alive. He died in 1884 in the Hereford Union Workhouse, his death registered by the master of the workhouse, not someone from the family.

Both James Probert and Mary Wall seem to have been illegitimate. James was born in 1822 and in his baptism at Pembridge he is decribed as "base born son of Elizabeth Probert, pauper of Pembridge".I had been stuck at this point for some time, until I obtained James & Mary's marriage certificate. To my surprise, both fathers are named, even though they were not named at the baptisms. James Probert's father is given as John Watkins, whose occupation was also that of a mason. This suggest that John Watkins may have acknowledged his illegitimate son and taught him his profession. Elizabeth Probert appears to have had another child out of wedlock - Edmund baptised 1826. I have no indication yet who Edmund's father was, but poor little Edmund died only 4 months later. With these additional details, I may be able finally to take this branch of my family tree further.

Mary was born in Weobley and her baptism just states "Mary Wall daughter of Ann Wall of Shoals". Although not mentioned on her baptism record, her father was named on her marriage certificate as John Meredith, a labourer. I've not worked out yet which John Meredith he is, but I have finally had a breakthrough with her mother Ann Wall. I found Mary Wall in the 1841 census living with a family called Probert. Of course the 1841 census doesn't give family relationships, but although Mary was described as a female servant, she was listed amongst the other children rather than at the end where servants were often put. The table below shows the information from the 1841 census:

It turns out the older Ann Probert was Mary's mother Ann Wall. A few years after having Mary, Ann had married James Morgan and they had 3 children before James's death in 1831. She then married Thomas Probert and had the 3 young children shown in the census. Having a bit more info about Ann Wall meant I could track her through later census returns which suggest she was born about 1797 in Shobdon. There is a baptism listed online for an Ann Wall born in 1797 in Shobdon, the daughter of Thomas & Mary Wall. However, there are no other children listed for Thomas & Mary although there are several for a Thomas & Elizabeth - perhaps the mother's name Mary was a transcription error?

Ann Wall and James Morgan's oldest son John Morgan seems to have lead an interesting life and lived to a ripe old age. He died in 1917 in Weobley and the parish magazine of the time gave a very detailed report of his life. At the age of 21 he went to London and worked first as a warehouse porter before becoming a policeman. He was apparently on duty at St Paul's for the funeral of the Duke of Wellington in 1852. He also used to patrol the area where Charles Dickens lived and would regularly chat to the writer while checking his property for him. He returned to Weobley not long after and became parish constable there although it must have seemed a bit quiet after London! He married twice, first to Mary Bedford who sadly died not long after the birth of her second child. His second marriage was to Sarah Evans and they had a large family together. The splendid photo below (courtesy of a very kind descendant of John's) taken probably around 1910 to 1915, shows John Morgan seated in the centre with two of his daughters plus 4 grandchildren and Spider the dog! (if you hover the cursor over the faces you should see the names of the individuals) 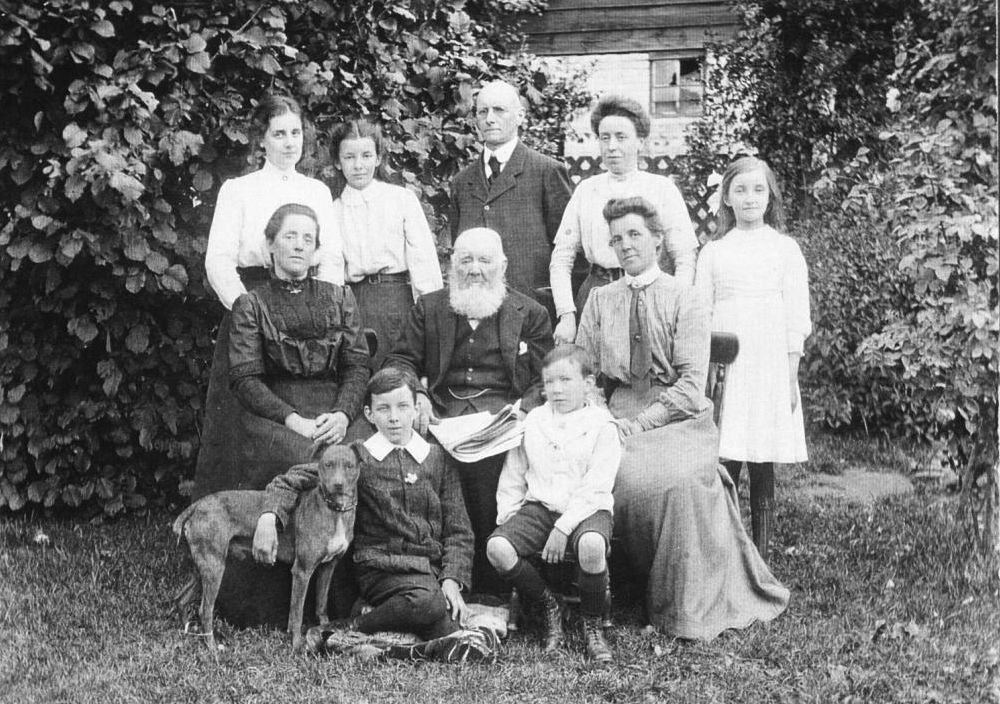 I don't know yet if it is just coincidence that Mary Wall's stepfather was called Thomas Probert and she subsequently married a James Probert, or whether James and Thomas were somehow related? If anyone has any theories I would love to hear from them.

Although I haven't found out too much about James Probert's ancestry, a couple of newspaper articles have given a bit of an insight into his life. As an illegitimate child he must have had a bit of a difficult start to life and perhaps this is why in 1836 he was arrested for stealing barley, for which he received 2 months hard labour - pretty tough on a 14 year old. Although he seemed to recover from this set back to make a life for himself as a mason, he did get in trouble again later in life. This time in 1861 he was cautioned for being drunk and disorderly. The two clips below show the reports from the newspapers of the time. Images © THE BRITISH LIBRARY BOARD. ALL RIGHTS RESERVED

The family tree below summarises what I know about the above generations of the Probert family. It is hopefully reasonably accurate, but if you spot any errors, or any relatives, please feel free to E-mail me