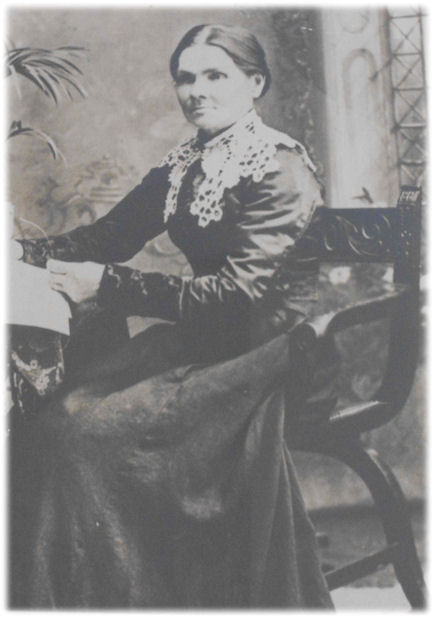 Fanny Green was one of my great, great grandmothers. She was born on 4th May 1849 at Westhide, Herefordshire, the ninth of 10 children of Thomas Green & Elizabeth (or Betty) Lawrence. The family appear in the 1851 census living at The Three Houses, Westhide. Thomas was described as being an agricultural labourer (pauper) so the family were obviously not too well off. The table below gives a transcription from the 1851 census (H.O.107 1977 Page 9 schedule 29):

Fanny's mother Elizabeth Green died suddenly one night aged only 48. There was an inquest into her death and the Hereford Times reported that one of her children found her dead in her bed at night and raised the alarm with the next door neighbour. Her husband Thomas was away at the time drying hops at Castleton. The verdict was death by Natural Causes. Image © British Library Board. Image created courtesy of THE BRITISH LIBRARY BOARD. Image reproduced with kind permission of The British Newspaper Archive (www.britishnewspaperarchive.co.uk)

In 1861 the remaining family were still in Westhide, although Fanny was no longer living at home. She would have been aged 12 and, with the family being so poor, she had been sent out to work. She was living in with an elderly farmer and his wife (still in Westhide at least) and was described as a "Servant of all Work" - a hard life for a 12 year old.

Fanny's father Thomas appears to have lived at Dodmarsh, Westhide for much of his life. The family were living there at least between 1828 and 1853 when most of his children were baptised. Thomas also appears in Westhide parish rates book between 1862 and 1867 as occupier of a cottage and land at Dodmarsh. In 1871 Thomas was still living in Westhide and Fanny had moved back in, with her husband James Corbett and one-year old daughter Elizabeth. Three doors down was his son William Green and his family. The table below gives the details from the 1871 census. (RG10/2693 folio 40 page 1 schedule 4)

Thomas Green died in 1875. Thomas Green and Elizabeth Lawrence had married in 1825 in nearby Avenbury. Their first child, Thomas, was born soon after in 1826, Thomas senior then being described as a labourer of Cruise Hill, Westhide. Thomas junior married Elizabeth Harris and moved around the country presumably for work. The last sighting I have of him is in 1871 in Stoke Prior, Worcestershire. His whole family have proved tricky to find - being often creative with their birth dates, birth places and even names. Thanks to cousin Michele we now have a breakthrough with the discovery that at least one of Thomas' children kept in touch with the family back home in Herefordshire. Harriet (or Henrietta as she was sometimes known) married William Augustus Rudd Davy (Gus) and the pair wrote regularly to Fanny and her family in Withington.

Thomas Green senior's second son William was born in 1828, the family by this time having moved to Dodmarsh, Westhide. William Green married Mary Preece and raised most of his children in Westhide too. Their family was there in the 1851, 1861 and 1871 censuses, William being an agricultural labourer in each. William appears in the Westhide rates books for Dodmarsh for the years 1858 to 1863 and 1866 to 1867. Most of their family also appeared in the church attendance lists for Westhide in at least 1872 and 1873. By 1881 the family had moved to Tarrington and by 1891 they had moved again to Yarkhill. William Green was still alive in 1901, by this time a widower though and living in Weston Beggard with his unmarried children Albert & Selina and two grandchildren. William died in Hereford in 1908. The photo below shows Albert & Selina Green in later years sitting outside their cottage. Much of the information I have on the Greens has been kindly supplied by one of Selina's great grandsons. 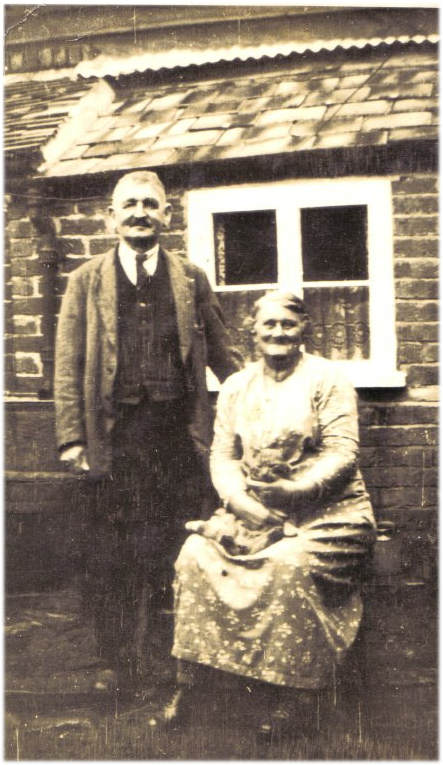 William's youngest daughter Sarah Ann Green married Henry Stone in 1889. When one of their children, Valentine Stone married in 1925 in Cardiff, my grandmother Ethel Brookes was present (in the photo below), so obviously the families had stayed in touch, even though Val and Ethel were only second cousins. 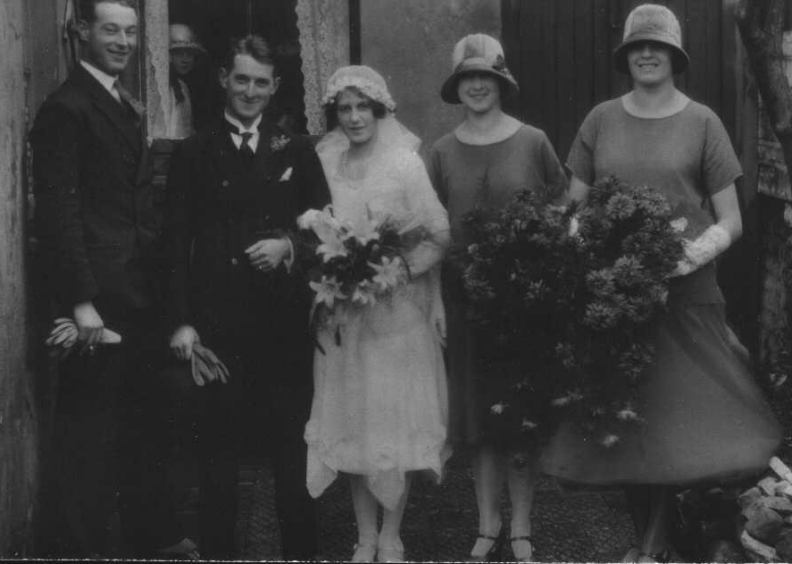 For a long time I didn't know what happened to Thomas & Elizabeth Green's daughter Mary. She'd vanished after the 1851 census and with a fairly common name like Mary Green I'd been unable to trace her. Then my cousin Michele gave me a copy of an old postcard of Westhide which had been sent from Withington by a Harriet to a Jack Beasley care of a Mrs Congrave in Tamworth. After a lot of detective work it transpired that Mrs Congrave was our Mary Green - now the second wife of William Congrave and that Harriet and Jack Beasley were her step-grandchildren. Mary obviously kept in touch with her sister Fanny Corbett to the extent that some of her husband's family spent time in Herefordshire. Sadly young Jack Beasley died in France in 1918, but I have been lucky enough to have been given a copy of a photo of him by his sister Harriet's grandson, who in turn now has a copy of the postcard his grandmother sent over 100 years ago! Below are the front and back of the postcard that started it all and the photo of John (Jack) Beasley. Have a look at the tree below to see where the Congraves and Beasleys fit into the Green family.

Another sister - Elizabeth Green married John Taylor and stayed mainly around Westhide. Thanks again to cousin Michele we now have this fabulous photo sent by William Augustus (Gus) Davy to his wife's cousin Sarah Jane (Jennie) Corbett. On the card Gus describes the lady as "Aunt" suggesting the woman was an aunt of both Sarah and his wife - so she must surely be a Green. The only possibilities seem to be either Elizabeth or Mary Green. At the moment we don't know which one she is, but she does look very much like sister Fanny Green. If anyone can identify her, we would love to hear from you. 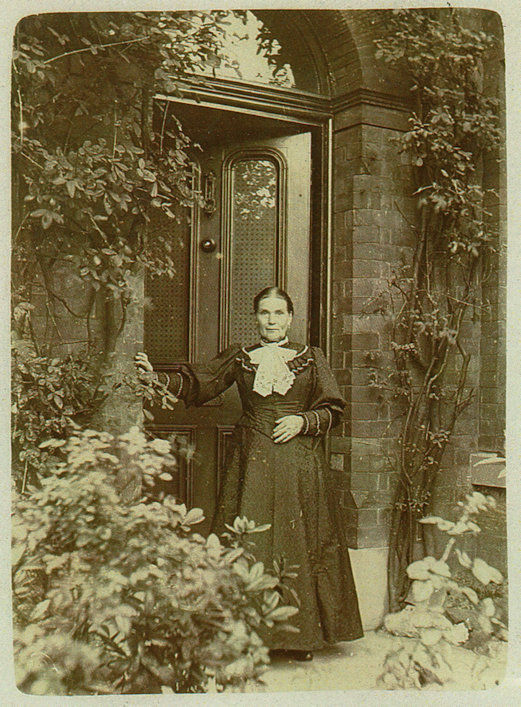 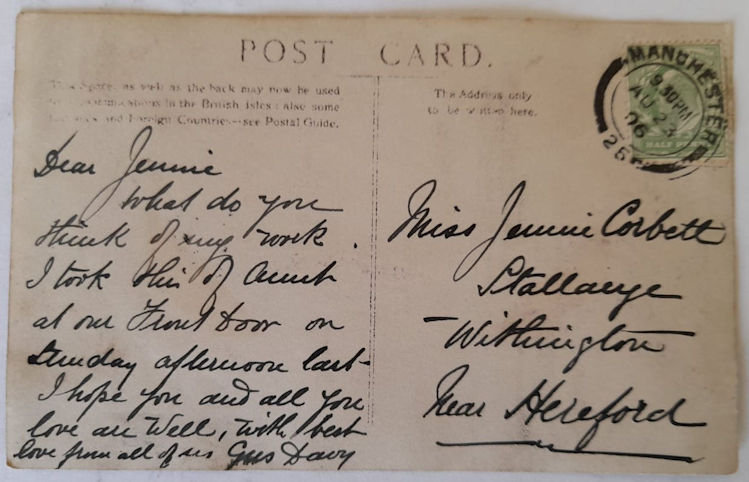 Of the remaining 5 children of Thomas and Elizabeth Green - George died as an infant, Joseph survived and remained in Westhide but never married, and poor Charles died aged 19 after getting kicked by a horse. Image © British Library Board. Image created courtesy of THE BRITISH LIBRARY BOARD. Image reproduced with kind permission of The British Newspaper Archive (www.britishnewspaperarchive.co.uk) 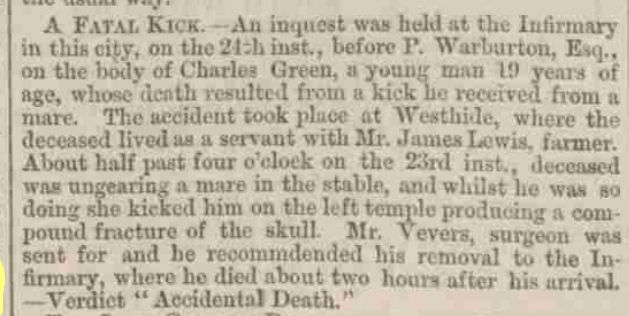 The remaining 2 children - Richard and James both seem to have disappeared without a trace after 1861 and 1871 respectively. If anyone knows what happened to them, please do get in touch. Tracing the origins of Thomas Green senior has proved even more difficult. There is a Thomas Green born in 1806 in nearby Weston Beggard who seemed a likely candidate, but he can be traced through the censuses as far as 1881, so he is not our Thomas Green. So for the time being at least the Green line can go no further.

Fanny Green herself married James Corbett in Westhide in 1869 and they had 9 children together. Here she is with her son Joseph Corbett. 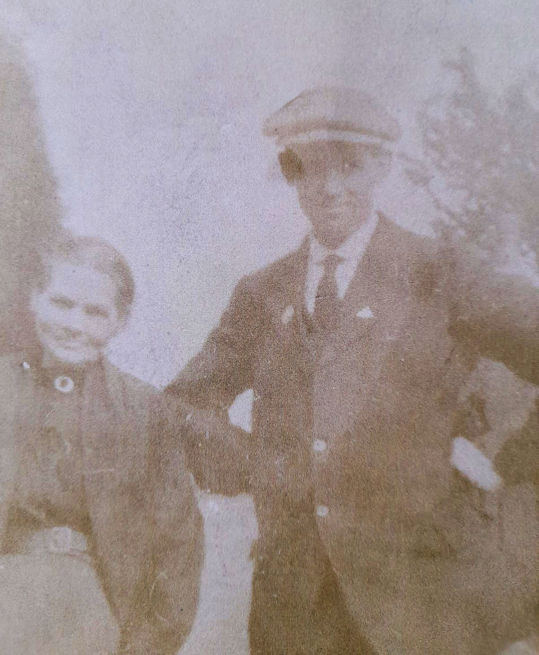 The family tree below summarises what I know about the above generations of the Green family. It is hopefully reasonably accurate, but if you spot any errors, or any relatives, please feel free to E-mail me